I keep lookin’ at the sky 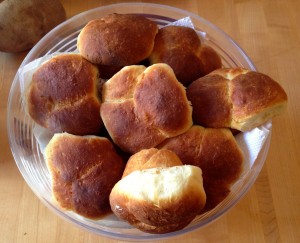 ’cause its getting me high

By now we should have made it through another Thanksgiving meal and for those that chose to attempt it, the day after shopping on this Black Friday.

In the end I made up some sides and brought them to my folks to eat this year. Yeast rolls as you can see was one of the few things I made. They came out pretty good and I was surprised how easy they are to make. I also made some cranberry sauce and cornbread dressing. Between this and what my folks made we ate pretty damn good and gluttonous yesterday. I’ll put them all in the recipe section later. I am in the process of reformatting all the recipes into a standardized format thats easily printable so you guys can take them with you.

I didn’t bother with shopping today. Not that I ever would. Saw a few reports on TV of the idiots around the country looking for a deal. The mad rush and push to get a cheap flat panel tv or a video game in this country is beyond sad. I am all for getting a deal and times are tough on people, but its stupid to think the only time you can score these deals is the day after or more accurately this year, at nine pm on Thanksgiving night. Much like our national elections in this country, people are stupid.

Really? Over a phone, Xbox, waffle iron? Look closely at this video. These imbeciles VOTE, and make more imbeciles.

Folks, understand this right here right now. Mankind is officially on the downward leg, rapidly picking up speed to extinction. Do not fool yourselves for a second that it is not happening.

Other then that I don’t feel too strongly about the whole matter.

I hope that all the rest of you had a good time with your families and had the chance to sit down and relax with loved ones. Its got to be a little more important and gratifying then standing in some line at the crack ass of dawn and putting up with this nonsense. As a small child I loved Santa Clause and getting gifts at Christmas as much as the next kid, but with all honesty from those moments to this very one, none of that shit mattered more then being with family.