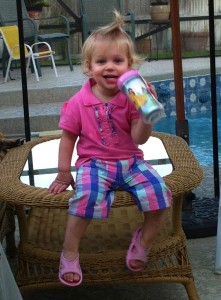 This is one of my nieces, Charlotte. She is about a year and a half old and almost getting to the age where I can teach her to say dirty words. She loves me. Her uncle will be so proud of her if I can get her to say “Bullshit” on Santa’s lap this year.

We’re in the final stretch and heading toward the election finish line. Can you feel it? Soon there will be no more annoying commercials. No more obnoxious tweets or Facebook posts. (yea right) Well you get the picture anyway.

Reality is Wednesday we’ll wake up and no matter who wins the election between then and January the mainstream media will inundate us with talk of election fraud, ballot tampering, lawsuits and how one party screwed the other. You heard it here first so get ready. Yes, I know its going to suck a little more, but look at it like this, we’ve got the Thanksgiving and Christmas holidays fast approaching so there will be plenty of chances to escape the ugly reality of politics for a little while at least. A Romney win will also ease some tensions, but I think its too close to call. 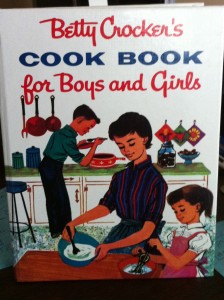 Friday I met up with friends. We had dinner and hung out at a few of our old haunts. A good time was had by all. A friend on mine whom I have teased on this very blog about her baking and cooking skills gave me a cook book for my birthday. Its a reprint from 1957 and actually its pretty good. I suspect she got it as a joke, but I have actually spent the rest of the weekend reading it from cover to cover. My friend doesn’t know I actually look for and enjoy reading old cookbooks as a hobby. 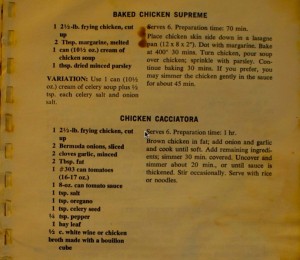 Last week, I downloaded a .PDF of an original cookbook from Berkley, California from the 1960’s that used to be given away by a
grocery store co-op that is no longer in existence. It’s absolutely intriguing to read period cookbooks from the past to see how people ate. It can tell you a lot of things about the time and people. The foods are essentially the same as today, but you can definitely get a feeling for times past when someone is talking about making say a pot roast, with a chuck steak as being economical at .39 cents per pound for the meat. Furthermore, can you imagine look at and reading a recipe in a book that was last popular and seen by the likes of Janis Joplin and Charles Manson or Jimi Hendrix? That’s who was running around this area of California when this cookbook was in the hands of the hippies making love not war movement.

Don’t be surprised if you start seeing some old school recipes show up on the blog. If they turn out good, of course I’ll take credit. If not, then we’ll continue the trend of blaming Debbie or the hippies of the 1960’s. Kidding of course. Debbie doesn’t take any crap off me and is a good sport. The comment section of this blog proves that out. 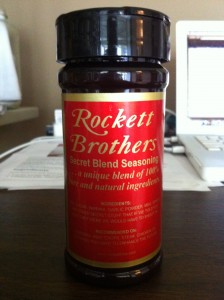 In other news. I have an internet buddy who lives in Kentucky. He makes a BBQ and really an all purpose spice blend, seasoning. Steve sent me a couple of bottles to try out last week. I have only tasted it on my finger, but its damn good. Watch this space for a complete report. I am going to start using he hell out of it. I think you guys may like it. I have two bottles and may give one away here to a lucky reader but thats only if I can control myself from using both bottles Steve sent me. In any event I’ll set up some links and or emails so that you can order and get your own. It’s that good trust me. I damn near ate a finger off tasting this stuff.

Well that’s it for a Monday report. Get up early and go vote tomorrow. The country needs you more then ever now. Your vote matters. Don’t let anyone convince you otherwise. 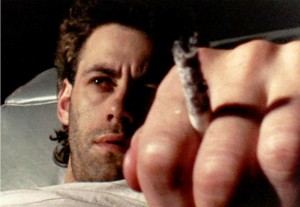 First things first. TGIF! Another week down and another start to weekend freedom. Hell yeah!

Its funny how something in life whether its a smell, sight, or even a mood will trigger something in your head to recall a particular song. Then once that song becomes the daily ear worm and you sing or hum it for the twenty-seven thousand time, it will bring you back to a memory of a time of your life.

I can remember the very first time I learned about Pink Floyd and The Wall. Where I lived, where I went to school, the color of my bicycle. I can recall where I was in high school when I actually bought The Wall on cassette tape and the car I drove and where I worked after school.

I wouldn’t necessarily even consider myself a big Pink Floyd fan. There is no denying the masterpiece of The Wall or Dark Side of the Moon. I was just never a huge fan, but you have to admit when a song can stick with you and make such an impression that lasts throughout your life, I guess as a creative artist you have done your job well.

Jesus, now that I think about it, Wish You Were Here, is like my  personal kryptonite. It’s like the movie equivalent of the ending of Forest Gump. I’ll listen or watch each one a hundred times alone, but not with a girl or any other person in the room. Just cant get through them. Sorry, not sorry.

I was going to wait until I blogged about this next bit but I cant. I am currently reading the book Life After Death, by Damien Echols. (Amazon Link). The name may sound familiar to you, if not thats ok too. I’ll help you out.

Damien Echols is one of the West Memphis Three. Damien spent 18 years on death row for the wrongful conviction of murdering three small boys in West Memphis, Tennessee. Damien’s case became the subject of three HBO documentaries, and countless high profile supporters such as Johnny Depp, Eddie Vedder and others who took up the cause to see that justice was served in freeing Damien and his other two friends from their wrongful convictions.

In a nutshell and long story short. The West Memphis Three were three high school kids who were convicted of murdering three eight year old boys, without a single piece of physical evidence linking any of them to the murders. They were your typical minority, goth-ish, emo-ish, different kids in school.  Nothing more. Well a little more, they were poor and in one of the cases of the three mentally handicapped and being easily manipulated into a false confession.

Want to see just how much our legal system can come off the tracks and do harm? Look no further then this case.

Anyway, last year the three kids (now men) were release from prison. New DNA evidence was collected that showed none of the convicted were at the crime scene at all. The only DNA that was at the crime scene was that of one of the dead kids step fathers, and another person whom was providing the step father an alibi whose testimony later is refuted by a number of eyewitnesses stating he was seen with all the victims an hour before the murders took place.

You would think after falsely accusing then convicting three innocent people for these crimes and after eighteen years of incarceration the state of Arkansas would want to make amends? Not quite. The state of Arkansas after ruining these kid lives for eighteen years, took one more swipe at them. In a very rare circumstance the state of Arkansas made the West Memphis Three take what is called an Alford Plea. The three had to basically plead guilty to three counts of murder, but maintaining their innocence and they would then be released for time served. This allowed them to get out of jail, but not be able to sue the state of Arkansas for the false conviction. Had they not taken the plea deal a new trial could have lasted another five years.

Damien, who was thought to be the ringleader of the three and sentenced to death, has written a book about his childhood and death row experiences. When I tell you Damien wrote the book, I mean just that. No ghost writer. Its his words 110%. When I tell you I have been a voracious reader the last twenty years of my life I’m seriously not kidding. If it wasn’t for an Amazon Kindle I would have twenty bankers boxes of books instead of the eight in the garage now. Damien can write and he does it well. No not well, its damn good. No wait, not damn good, this guy can fucking write and tell a story.

We all have problems and issues we have to overcome in life. Damien shows us what real problems are and how he overcame them.  Damien illustrates how he survived death row and is now moving forward with an incredible outlook on life. Want to read a great story of hope, survival, and perseverance? Read this book! I got the book last night I am halfway through it. I can’t put it down. Its that good, seriously.

You guys have a great weekend. I need to go finish this book. I also need to make a chocolate peanut butter cake to show off to one of my bakerella friends. She thinks she owns the baking heavyweight title belt because one time she stacked a bunch of stale chocolate chip cookies together and called it cake. Ok the cookies werent stale and homemade, but damn it, I am the Rocky Balboa to her Apollo Creed when it comes to desert and cake and she is going down for the count!