….before this whole shithouse goes up in flames.

I think Jim Morrison said that once. Or maybe it was Oliver Stone who pretended Jim said it once in one of his movies. Either way its a pretty good quote and if nothing else a decent philosophy to try and live by.

A lot of people regard Morrison and his band The Doors as epically defining the 1960’s counter culture and the Rock and Roll music scene. There is no doubt The Door’s shaped a lot of what was to come. Personally I don’t think he was a musical genius as say McCartney and Lennon. Jim certainly had lyrical chops but again I suspect that was a result of his affinity for poetry and literature. Peyote and acid probably helped a great deal too.

One thing I find about some music is that I associate certain music with physical places. This isnt true for all music. In the case of The Doors when I hear any of it, whether its studio recorded albums or concert bootlegs I say, think and feel like California. In my mind The Doors are California. Doesn’t matter what song either. When I hear The Door’s I imagine and think about California period. I get the same exact feeling about the Smashing Pumpkins and Chicago. Lynyrd Skynyrd and thats North Florida all day long no matter how many times I imagine Forrest Gump running his ass across Alabama.

I have been to these places, met the people, ate the food and drank the drinks. This music reminds me of these places no two ways about it.

When I hear Pearl Jam, Soundgarden, I don’t think of Seattle. I Don’t think of London or Britain when I hear The Who or Rolling Stones. The Beatles however makes me think of Britain up until Sgt. Peppers. After this point all I can think about is Charles Manson,dirty hippies and death. It’s still good music and I enjoy it, but in my sometimes rather twisted brain it can evoke strange images and feelings. I guess thats how you know music is good. 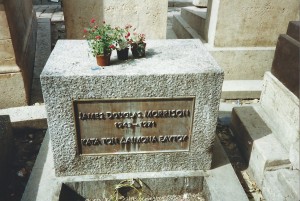 All this being said, you can imagine the dichotomy of visiting Morrison’s grave in Paris, France. I have been to Paris three separate times in my life. Paris to me has nothing to do with great music, especially Jim Morrison and The Doors. To me Paris is great food, great visual art, but music? Just does’t hit me. Jim Morison died and is buried there though and people check out his grave as if its a national monument. I did once. Its weird being there. It has no feeling of music, or The Doors, or California. It’s just “Jim” if I had to put a label on the experience.

In any event, to try and sum this rather meandering and pointless post up, music has the power to take you places. The problem is not much of todays new “music” achieves this goal. In fact it falls short of taking my mind anywhere other then wanting to jam pencils in my ears. Where did the good music go? There’s a few groups out there trying and still holding true, but what is happening with the brand new music?

When the internet opened up instantaneous communications and people of all ages and background can upload a video from their phone to YouTube, we should be inundated with incredibly gifted musicians making incredible music right now. Where are they?

Is the best we can hope for and muster up, some ding bat Korean chink pseudo fucking his horse to a catchy beat to take over the musical world?

Where is the next Misty Mountain Hop? The next Yellow Ledbetter? Christ, I would settle for the next Jack and Diane or Pink Houses right about now. Where are they? In this day and age of self promotion, YouTube, iTunes, and 24X7 continuously connected world where are the next Led Zeppelin or AC/DC? We don’t need Sony or BMG or any of the other dinosaur music industry to find this new music and give it to us.

There is something better then some country pop chick who cant keep a man or some Disney child star lip syncing some auto tuned garbage. There has to be I just know it.

Until that time, I’ll keep my eyes on the road and my hands down my pants or upon the wheel.

2 thoughts on “I am going to get my kicks”