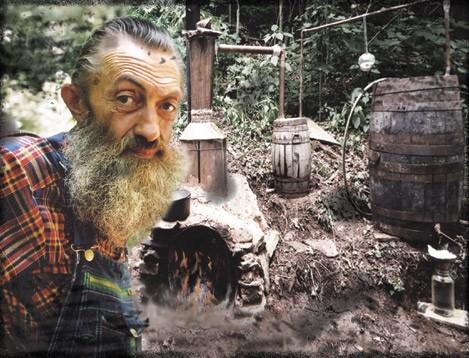 I occasionally stop at a local farmers market for fruits and vegetables. Last week, when I stopped in, the proprietors were selling Amish noodles. Basically it looked like wide-ish egg noodle, but I am pretty sure it wasn’t made with eggs. Ingredients listed flour and some other things and that it was from Indiana was about all I could discern. Anyway it looked interesting so I bought a bag. “Its Amish” I thought to myself. How bad can it be? The Amish are a simple people who basically renounce all modern day amenities like electricity and pretty much every other convenience. Humble is the way to the lord and whatnot.

I know what you’re thinking. Brock, what the hell does Amish noodles the Discovery channel and moonshine have in common? I’m getting to it, you impatient hooligans!

Back to my Amish noodles. I get home, make the noodles. I had some leftover pot roast, so on the fly I made some thrown together beef stroganoff. Or as I was in a rather faded and X-rated mood, called it my special beef strokin’ off. Don’t ask me why I called it that. I assure you it had nothing to do with anything with what it sounded like and turned out rather good. I was more just slipping in and out of my fantasy of being a world renowned pornographer turned cook book author, but I digress. The noodles were good, the beef strokin’ off was good, and as I have a tendency to do, I thought about lost love because the noodles came from fucking indiana. I hate my mind. Not the porn fantasy part, the old girlfriend parts.

Discovery Channel has a new series called Amish Mafia. The premiss of the show, is that in and around one of the largest Amish communities in the country, Lancaster Pennsylvania, is this semi-rogue group of Amish, or pretend to be Amish who have assembled their own little Mob/gang/mafia group of Amish thugs. They have cars, cell phones, guns etc. According to the shows footnotes this group of Amish thugs are not generally acknowledged by the true Amish as legitimate, but they kind of just look the other way. They are basically claiming to be the Amish muscle for settling disputes, charging the Amish businesses protection fees etc. Its so ridiculous because the “Tony Soprano” ring leader of this group is the worlds biggest douche bag you can imagine. His name is Levi and he is essentially a dumb assed roofing contractor who essentially saw an opportunity to be a douche bag in the middle of Amish country Pennsylvania. I give him credit for carving out a special and unique niche business where there was none.

What does the Amish mafia do? Well according to the show and what I briefly described above, Levi and his group of Amish losers, cater to all the normal Amish kids who don’t get to experience much of the modern world. They throw house parties, with x-box, Maytag washers and dryers, iPods, and I think I even saw, heaven help the Amish, a can of  Red Bull and a bong.

Amish kids as I understand it, reach a certain age in their teens, and basically get a year, to go out into the world and fuck off with the full blessing of the Amish elders. Its called something like Rump Shaker or rum shaka, boom shaka. I really have no damn clue and too lazy to Google Fu that shit. One of you teachers pets please hit it up and leave extra credit – take a star from petty cash, comment below for the rest of the class.

So they throw house parties for the kids, extort protection money from the legitimate Amish store and shop owners, backyard illegal MMA fights and gambling. Run off any fake Amish furniture makers and interlopers.

Its crazy. I think its half bullshit and fake, and I hate Discovery Channel because those bastards got me hooked on some cockamamie show. Again.

Yea, they got me with the Moonshiners show too. Now this show I know is bullshit. Bullshit in the way, that while making moonshine exists and is illegal, what and whom they are filming is completely fake and scripted. Technically Discovery Channel cant send camera men and production out and actively commit crime then sell the video of it on TV and make money with it. I am not that stupid.

So, I watch the show, because of a few reasons, but mostly because it looks damn easy to make moonshine. I love knowledge too. I also like backwoods old coots named Mr. Jim Tom. He’s a main character on the show without any teeth. Mr. Jim Tom is like the next old moonshine maker behind one of the greats Popcorn Sutton.

Anyway, this show once you get past all the silly scripted pretend sneaking around, the making of the moonshine is pretty well documented and easy to follow. Its also mildly interesting. Hey, I’m not watching The Voice, or Dancing with the Retards, and by gosh who couldn’t use the skills to make ones very own distilled spirits? Still I have to damn the Discovery Channel for the fake drama and other nonsense, they got me hooked here too. Bastards.