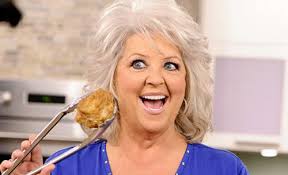 By now we all know the brouhaha that has surrounded the famed celebrity cook, restauranteur, and shitty pots and pans shill Paula Deen. Thirty years ago she admittedly confessed to her at the time husband about referring to the man that held a gun to her head while working as a bank teller during an armed robbery as a “nigger”.

This shocking revelation was discovered during a sworn deposition regarding an ongoing law suite in which Deen and her brother are defendants.

I am not shocked how the mainstream media has handled this revelation. However it is interesting how the general public has taken the contextually and inaccurately drawn conclusions about Paula Deen’s past use of the obligatory N-bomb. The media and simpleton public have somehow come to the conclusion that Paula Deen referring to the black man that could have killed her, who forcefully and illegally exerted his will on her with a firearm during the commission of a crime as a “nigger” that she is somehow now labeled a racist and something worse then Hitler, the KKK or a run of the mill skin head neo-nazi.

I live in the south. I have grown up in the south. I am well aware of the roots and origin of the N-word. I know of its derogatory nature towards a group of people and its negative connotations. I am somewhat educated, have traveled all over this country and a good chunk of this planet. I have interacted with in both my professional and personal life people of color. Black, Yellow, White, Mulatto, you name it. Although I have never met any gypsy fortune tellers with three nipples. Pretty much the rest of the population however I can mark off the bingo card.

Everyone knows the word “nigger” is offensive and has no place in everyday speech.

In my life I have heard the word “nigger” used many times. I realized it wasn’t because I lived in the south, or associated with bigots. I can honestly say I have heard the word more times then not from the mouths of blacks themselves. Educated blacks, all the way down to the lowest common denominator homeless blacks on the street. Blacks in south, in the north, USA blacks, all the way to African blacks who never saw an electric light, who USA blacks would say, “goddamn Africa is home and where we’re from but “F” this is some backwoods shit.”

My question is if the word “nigger” is so abominably offensive to blacks and an outright cardinal sin for a caucasian to utter, then why does the black community use the word so freely amongst themselves?

Rap lyrics in the last twenty years? Eddie Murphy? Richard Pryor? Hollywood, Friday, Next Friday, Friday after Next movies? Overheard any three blacks talking to each other when they think no one else can hear? Or hell when three blacks talk to each other and don’t care who else can hear? Give me three black people, thirty minutes and I will guarantee you with the last cent to my name, any number of “nigger, niggas, negros” and as sure as i am typing this rather culturally controversial blog post a “shit mothafucka” as sure as the sun rises in the east and sets in the west each and every day.

I have heard and experienced these same “nigger” and derivative word usage by blacks essentially all over the world, in all cultures, religions, educational, financial and fiscal levels of black existence. Argue all you want that I may be stereotyping a small segment of the black community to represent the whole. I simply do not agree and it has not been my empirical experience.

Do not misunderstand me, please. I do not suggest or condone the common usage of the world “nigger” by Paula Deen or anyone else for that matter. However I do feel it rather hypocritical of any person or organization to pass judgement on anyone that may have used the word at some time in their life, when the majority of the segment of the people the word is targeted to offend is freely using the word amongst themselves in relative everyday language.

I should fully disclose and although I am not under oath but for the mere journalistic  integrity of this blog post I have used the word “nigger”. Actually I better just come clean with all the bad words I have used.

These are just the worlds I have either used to describe a person or relate a completely inappropriate off color joke. This week.

Guess what? I have been called everyone of those words at some point in my life. By my mother, father, brothers, ex-girlfriends, current girlfriends, blacks, whites, preachers, nuns, senators, congressmen, strippers, and the occasional Jehovahs Witnesses on a Saturday morning at my front door.

I have used the word ‘nigger” yes. I am not proud of that fact but I have. I have also been down in the dirt and sand with a black man in a fighting hole next to me not knowing what the next hours were going to bring to either of us, but he was my friend and I would have killed someone or died myself defending him and I know he would have done the same for me.

You see I can tell a dirty joke. I can laugh at a dirty joke. If you’re a cocksucker I’ll call you a cocksucker. The color of your skin when I meet you means nothing to me. Its your character and your actions towards me that I judge you on. I expect nothing less in return.

Could Paula Deen have used a different word describing the man that took from her and could have killed her? Sure she could have. Was the man that did those things during that bank robbery what Paula Deen called him? In my opinion you bet your ass he was. I’d have called him the same thing if it happened to me tomorrow much less thirty years ago. The difference is I didn’t make $17 million dollars last year. Paula Deen did.

You see the word “nigger” really isn’t that offensive to anyone truth be told. Unless you got a lot of something to lose and you’re white. You see if Paula Deen made any mistake by using the word “nigger” thirty years ago describing the man that robbed her at gun point, its that she didn’t use the same word to describe the white woman who Paula and her brother had to fire from their restaurants for cause and is now bringing this law suite against them. Because frankly she deserves to be called one too as much as the man that robbed Paula 30 years ago. They are both doing the exact same thing, only one used a gun and the other is trying to use the legal system.

Lets be honest here. Had the woman who is suing Paula and her brother Bubba worked for Patrick and Gina Neely (whom are black, and were discovered and owe their food network fame to Paula Deen) was fired and then brought a law suite against the them on the basis the Neelys called some white woman a honky 30 years ago for not paying for some BBQ ribs do you think it would be national news?