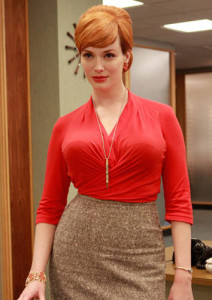 So I have been watching Mad Men again this season. It’s been on AMC for a few years now and if you been under a rock, its essentially about a Madison Avenue advertising agency set in the 1960’s.

Its pretty much been the number one show for the last five years or so and if you haven’t checked it out get your Netflix on and settle in for some binge TV.

Christina Hendricks plays the roll of Joan Harris. She is head of the secretary pool and pretty much the glue of the agency. She also bangs Roger, one of the partners and is mother to his bastard child. Don Draper may be a smooth operator, steel and sex appeal, but Joan Harris just down right rocks my world. She is a bad bitch. They just don’t make women like that anymore. I watch this show and wish and dream that I lived and was of age during this era. I would have been bigger then pop top beer cans. I could have ruled the world with my very own Joan Harris.

Really what happened to the work place? The one where I could light up a smoke in my office, pour a scotch and smack a secretary on the ass and tell her “Good job sweetheart, now copy that letter to the partners, buy my wife a valentines day scarf, and bring me another scotch.”

I think it was the Xerox copiers, computers, internet, and probably some scumbag lawyers. Life was so much simpler with short hand, IBM Selectric typewriters, mimeograph machines, Camel unfiltered cigarettes and good scotch.

We NEEDED women for those things. Rotary dial phones and a switchboard, women. Dictation, women. Supply closet inventory, women. Opening the mail, women. Getting me another scotch, women.

Is it any wonder in the 1960’s when business operated this way with vital business roles fulfilled by women, (with great tits and ass) at the direction of incredibly smart and business savvy men, we were a nation of greatness? We went to the moon. Chevy Camaros and Corvettes had 400 horsepower and the Detroit auto industry was booming. Swanson made a fried chicken TV dinner you could actually eat. The little chocolate brownie cake was GOOD! Captain Kangaroo, Mr. Green Jeans and Mr. Moose didnt give two shits about your kid losing at picture pages. Winners went home and fucked the prom queen, losers who cried got a ton of ping pong balls dropped on their heads in shame. We were a country of look good, work hard rise to the top, or screw up, have a case of body oder and eat your boogers then get picked last for the kickball team.

Why? Because beautiful women, who were smart, knew their place, and kept their mouths shut, let us men think we were in charge, placated our tender egos and organized our shit. Beautiful women made us look good and we succeeded on their hard work and went out and conquered more. They brought us scotch.

Now look at us. I have to type my own shit! I can’t even inappropriately look at the secretaries ass much less give it a good pat and compliment her on her appearance without a trip to human resources with corporate counsel present.

Is it any wonder our economy is in the toilet? We don’t produce shit anymore. We’re a country of whiners and we reward mediocracy. We don’t want to offend the losers by elevating the winners. Everyones equal. I have to get my own goddamn scotch!