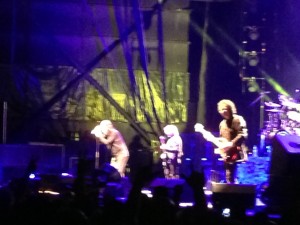 So last night after many months of anticipation I went and saw Black Sabbath in concert. Probably the first big name concert I have been to in the last five to eight years. My how times have changed. I’ll go thorough some general observations and tell you about my experience.

Over my life I have been to a good amount of live concerts of big name bands. In fact as I sit here thinking about it, the first concert I bought my own tickets to and got myself to the show on my own was an Ozzy Osbourne concert in the now extinct Hollywood Sportatorium down in Broward County, Florida probably in the mid 80’s. So seeing Ozzy back with two of the three original members of Black Sabbath is a nice full circle kind of thing.

Most of my live music experiences over the last five to eight years has been more the home grown, local bands, local venue type deals. I love the big name acts, but frankly I want to see new. I want to see the young jitter bugs striking out on their own trying to make it and if they got the spark I want to support them.

What started as more or less a joke some years ago with some close friends of mine who also enjoy a good dose of local music and dancing, whenever we would see a live rock and roll-ish type band, me being the critic would taunt the band (yes heckle, I admit I am “That Asshole”) into playing obscure bad assed rockers instead of some mainstream top forty bullshit to please the uptight old ladies in which ever establishment we were watching them in.

“WAR PIGS” became a calling if you will. A motto of mine. In fact I got so good at yelling it out, I have had at different times most of my well behaved, gorgeous, beautiful female friends who normally enjoy the typical top forty bubble gum garbage music come with me to some of these home grown rock bands in dirty hole in the wall bars, also scream out the request for one of rock and roll’s metal anthems right along with me. I am never more proud.

You know when you score a home run too. It’s your typical rock band, playing a local dive bar for $300 a night and a free round of beer. They are trudging through a set of Journey and maybe Barracuda by those two fat chicks. The looks on their faces show doom of playing some bullshit a bar manager told them the regulars like. Trying to make enough scratch for gas and grocery money. A few 50 something hags shaking their ass with the typical “white girl” dance. Then in-between some Creed and Chumba Wonga or whatever silly shit set list they made up, me in the back of the bar, usually shit faced and joking with my friends yells out during the awkward silence before he band launches into another career ending suicidal song by Foreigner I scream, “WAR PIGS!”

It generally goes one of two ways from here. A) ahhh yea we dont know that one and in their shame laugh off the misery of their lives (which really is just the misery of the old drunk asshole “me” pointing out that they suck balls and should commit mass suicide on stage) or B) they get a smile and look at each other like no shit someone in this shit hole with a sense of music appreciation, fuck it lets rip. They play it long loud and dirty. All the while the bar manager or establishments owners look on in slight disgust, while I proudly buy the band a round of drinks, jam $20 dollars in their tip jug/mug and sneer at the before mentioned pissed off establishment owners with a “fuck you” shit eating grin and dare them not to take my money for what I want to hear. A couple of hand shakes with the band during set break, some laughs and new friends made.

I’d say I am batting about .500 between the two outcomes but every time a B) happens, I forget one hundred A) over the years.

So you can imagine my happiness and my moment of Karma realized when Black Sabbath last night started the show with none other then “WAR PIGS”.

I just looked over at my friend Allen, gave him a smirk and said something like “Fuckin’ War Pigs, man”.

I dont have very many moments in life but last night was one. It was nice.

As you may also notice last night was my first real big name concert with a smart phone. I truly figured out and noticed “man times have certainly changed”. Instant access to data and live events anywhere in the world. Between Facebook, Twitter, and Youtube nothing is a secret anymore. You fart or see something happening in front of you and by golly it can be worldwide in seconds.

Its not Egyptian spring or a military coup of course, but goddamn it it was OZZY and Black Sabbath. There was people Face Timing with phones in the air. People sitting at home hundreds if not thousands of miles away watching War Pigs, right there with us.

There are no Zippos or Bics in the air any more. Its iPhones and Samsung smartphones. Everything is worldwide and instantaneous. Awesome.

There are also the fucking $13 beers and $40 Chinese concert tee-shirts. Nice to see some things remain the same.

Ozzy is the same too. I’ll give him credit though, he’s doing work and getting his money. Say what you will about the guy he started performing only a few years after the Beatles and the old guys is still standing.

Finally some really old frumpy lady next me me was blazing weed. Not just a joint. Or two. Or three. I am pretty sure this old broad smoked up half a kilo. Its been many years since I have partaken and frankly I have no problem with those that choose to use, but Christ, this old lady was so old and frumpy even in my mind playing out all the scenarios I had no urge to smack her on the ass with a “hey, you gonna share that thing?” which I wont lie in my younger days would have been a goto move for me.

Nah…I just couldn’t. I guess I am getting old. None the less with even a shower, I still smell like dope. All in all, some things change some things stay the same.