As I sit here with mixed emotions pondering the weekend, I guess I have to say it was a good one. Well they are always good, just go by too fast which we have discussed previously.

Sunday I awoke to a small “Cool Front” here in sunny Florida. Cool is 77 degrees and humidity below 85 percent. Below 74 degrees and its freezing and I start swearing. It was like 69 degrees at 6:30 am Sunday. I headed for the central heat. Relax. I didn’t turn it on.

I did fire up the oven and make some cinnamon rolls though. I felt rather re-newed and in a fall-ish mood so figured what the hell. Facebooked my intentions for baking, and had some friends over to help me eat the goodness. 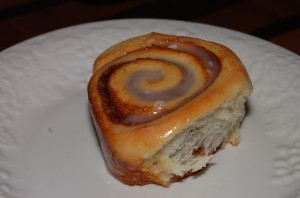 Guys if you can change your own oil, fix a flat tire, and replace a burnt out light bulb, you can bake these. Now I know, you’re saying, “why the hell make those when I can buy them in the grocery store and be done in 30 minutes or less”? I’ll tell you why. It’s because these are better. They will always be better, and now listen to me closely. If you make these for say your wife or girlfriend you will score major points. Remember the pancakes and waffles I showed you a few weeks back? Same thing here. A woman will love you long time if you take a turn and cook for her once in a while. Sure you can impress her with some Pillsbury tube rolls from the dairy section. She’ll be so proud of you for making the effort. If you makes these from scratch and put in the little extra effort the rewards will be increased by a factor of say eight or nine. You are moving into well lets just say your moving into Corvettes and Harley Davidson territory and the other private things you only get on your birthdays. Ok maybe not, but it cleans up your “punk card” and puts credit in the bank for later screw up.

Yesterday afternoon I caught some football at a local joint with friends. I ate some wings and watched the Jets loose to the Patriots. I have been a Jets fan for many years but I am about the throw in the towel on Sanchez. I can put up with Rex Ryan’s fat ass.  The Tebow mania doesn’t bother me. That bumbling idiot Sanchez is getting on my nerves. Its understandable if Sanchez doesn’t have the necessary protection on the offensive line, but for Christ’s sake, if he needs to unload the ball 10 yards or less in a hurry he’s like a retarded moron. How can a NFL quarterback fire a ball 30 yards like a bullet but cant get it 10 feet when he’s under rush pressure? Then when the damn fool hangs on to the ball when he is in trouble, he can’t hang on to the thing and hit the ground without it popping into the opponents hands. It was hard to see them loose to New England last night. That should have been a win. Oh well. What are you going to do? Well I know what I would do. I would have Tebow’s ass throwing the ball 1500 times a day until he developed that arm into NFL material then tell him to put his magic Jesus underwear on and start him.

Speaking of Jesus and whatnot, yesterday I learned something. There are churches that have “love offerings” during the service. I also learned that certain people who may or may not attend these churches that have “love offerings” also have rather twisted and foul thoughts regarding certain acts of love. Now I am not purposely trying to be cryptic here because frankly I only got a portion of the conversation. The point is sometimes you hear the strangest things from some of the people whom you’d never expect to hear such things from. I almost blushed, in fact I may have. I cant say for certain if what this person was talking about and the love offerings at this particular church are connected, but I most certainly asked more about the church. I may need to get some of this churching in that my friend seems to be involved in. Im just saying. I’ll report back on this topic as I learn more.

Try and have a good Monday.