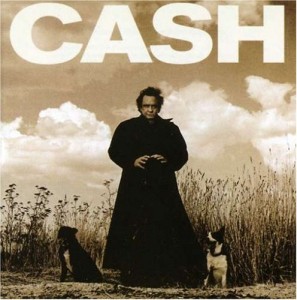 Been a long strange week and theres no better way to hold the line then with some Johnny Cash.

Some idiots decided to take out their frustrations of not making friends, money, or getting laid in this country by assembling some crude explosive devices and deploying them against innocent people in a popular foot race in Boston. Some people died, some people lost legs, some people lost their faith in the simple notion of public safety.

Then as has been proven time and again in this nations short history, when things are down we pull together and stand as one. Its a shame it takes such extreme devastation to look past religious or political differences to come together as a nation as was evidenced this past week in the subsequent killing and capture of the two suspects.

None the less we live in different times now. Its not up to our government to protect us from every idiot retard kid with a gun or extreme idealogical asshole with a pipe bomb. One needs to be vigilant and aware of their surroundings at the mall, NASCAR races, football games, or the movie theater. If somethings strange or your gut tells you somethings not right, move along or tell someone.

The kid that lost both his legs, who later in the hospital told the FBI/authorities the bomber looked him in the face, placed the backpack/bomb at his feet and then walked away only two and a half minutes later to have the bomb go off may be hailed as a hero. The fact remains, he unknowingly stood next to a goddamn bomb, after watching the bomber place the pack at his feet and did nothing. While hindsight is always 20/20 in this day and age if you’re out in highly congested areas and some jackass sets a rather large backpack on the ground and moves away in a fashion like he/she isn’t coming back you get your ass out of dodge too. 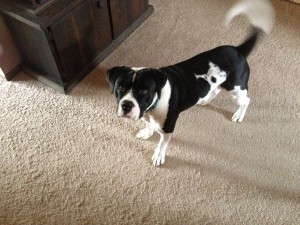 In other news, I adopted another dog from the local animal shelter. In keeping with my tradition of naming all my animals after characters from the movie Cool Hand Luke, say hello to Dragline.

Drag is about a three year old American Bulldog, Pit, Mastiff and anything else. About a year ago the local no kill shelter got him from the Humane Society which was going to 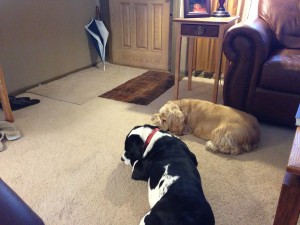 euthanize him the very next day. Dragline at the time was heartworm positive and not in good shape. We got him cleaned up, healthy again, and now he is thriving and in my home with my Cocker Spaniel, Lucas Jackson War Hero.

Both dogs are getting along without any overt our outward aggression. I keep my eye on them since they’re both males and when any sizing up to see who is the alpha between the two starts to take place, I get in the middle and show them that neither of them are in charge that I am their pack leader. The last few days around here have been lots of exercise, discipline and love. Rinse lather repeat. Its working.

Guns and the second amendment has been a pretty hot topic these last few months. I will admit I felt good about watching a dejected Obama cry on TV about his gun legislation not getting past the senate. As if I needed to state publicly, I am not in favor of ANY additional gun control. Not “assault” weapons bans or magazine capacity limitations. I do not support private sale background checks. If a government agent can come to my door with a thirty round magazine in an assault type weapon, as long as I am not a convicted felon I should be able to meet that force with the exact same level. Period the end. Its not about hunting, its not about need. Its about simple unalienable right! 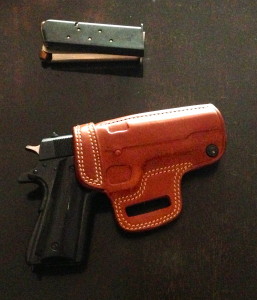 Last week, a friend of mine whom is new to firearms and shooting wanted to go to a gun range and shoot. I offered my services since any opportunity bring someone new into shooting and firearms with some level of safety and respect is a good thing. I have plenty of guns, been shooting all my life so away we went.

We drove to a brand new indoor rage not to far from here. Plenty of staff, new accommodations and equipment. Gun rental, ammunition, eye and ear protection you know the scene.

After a short questionnaire and hold harmless releases, all new members watch a five minute range safety video. No problem I think and we head over to a small tv in the corner of the establishment.

Its a Saturday, business is good and there are plenty of people in the shop both customer and staff. My friend and I are about a minute into the safety video, the front counter is over my right shoulder behind me where business is being conducted. People buying range ammo, renting guns, having personal weapons safety checked for used on range etc.

In all of about 1/2 second I automatically know what the sound is without even flinching or turning my head. My lady friend who has never really shot or been around guns jumps about three feet straight up. I position myself between her and where the sound came from. I think in my head, “ok we’re at a gun range with clearly armed staff, we’re not being robbed, so the next thing is accidental discharge and I am going to look over there now and see someone bleeding out on the floor if they weren’t already dead.” Remember the elapsed time from gunshot to me making sure my friend was ok, to turning around knowing what I was going to see was all of about 1/2 to 3/4 of a second.

I look over, sure enough accidental discharge. No one is down, no one is bleeding. Good sign. Some young kid staff member had the sense to point the customers weapon into a safe direction while either clearing a jammed weapon or handed a loaded weapon from a customer. I never got the full story, but the rest of the staff didn’t beat the shit out of the customer after the fact so I suspect the staff was trying to clear a jam, which was successful albeit through the wall behind the cash register.

While the entire establishment is deathly silent and in disbelief, I rather loudly proclaim “maybe you guys (staff) need to watch this movie too.”

Everyone is ok, the staff member chokes his balls back out of his throat and excuses himself to go change his pants.

I knew this wasn’t going to be a good start to introducing my friend to the pleasures of shooting and gun ownership. However she was a trooper and continued on. Nervously.

I had my heirloom reworked 1911 .45cal that my grandfather carried in WWII and my father carried in Vietnam. I rented a nice Luger .357 roll gun for my friend as she was interested in revolvers. Now you’re probably thinking “you gave a woman new to shooting, who just stood 10 feet away from an accidental discharge a .357?” 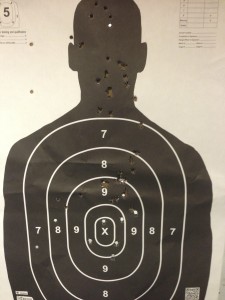 Yes I did. I am of the opinion while I have her here go big now and get it over with. You know what? She shot it too and believe it or not with all things considered she did very good with it. It is in fact too much gun for her, but I reassured her this is all part of the process of finding a personal weapon. You shoot a bit of everything, but now she has pretty much as far as kick and power, shot the worst of the worst. Granted there’s the .44 mags and .50 hand cannons but we already know those will never be a part of her arsenal. We put a box through the .357 and .45 and she tries both. She’s never really been around an active busy gun range and shot at the same time, plus with being unnerved with the slight episode in the lobby, she did do well. I was proud of her. We’ll go again to the range and try other guns. She’ll get more accustomed to the sounds and smells, and she’ll one day pick a gun to call her own. All in all a successful fist trip.