I recently read a great account about General Robert E. Lee at Gettysburg. Lee’s horse was named Traveller and was almost and damn near as beloved as General Lee himself. I thought to myself “Traveller” would be a good name for a baby boy.

See I would name my first son Traveller, Wolfgang, D’Artagnan, Patton, or HecktorJulioJesusMachoComacho, if said son was born of a questionable alien status of a rather latin mother with an incredible ass.  My name is Brock for Christ’s sake. I just cant name my first son Joe, or Mike. (no offense to any Joe or Mike out there) I have a heritage of naming first sons rather unique and masculine names to uphold. <insert Luca Brasi paying respects to the God Father Don Corleone on his daughters wedding day here>……Don Corleone, I am honored and grateful that you have invited me to your home on the wedding day of your daughter. And may their first child be a masculine child.

To my knowledge, I am not required or have been consulted to name any sons this week. Can’t imagine why….but hey we all have our crosses to bear.

However earlier this week at work there was a turn of events that when they happened I knew what would eventually come to pass the moment they started occurring. As you may be already aware from a previous blog post, Tuesday morning someone turned in a beautiful male Golden Retriever. Here’s the story.

Every morning at the shelter as you can imagine there is a certain routine that gets done day in and day out. We essentially empty the building out, (dogs into outside runs) and commence to douche out and sanitize the entire building. As you can imagine an animal shelter with upwards of 75-100 dogs at any time can get rather “hairy” in a normal day or night. We have industrial equipment and a pretty good system with any number of volunteers and the job gets done rather quickly. It is what it is. Although we start this process anywhere between 7 and 8am each day, we don’t actually open for business until about 11:30am in order to get all things needed to be done, done and ready for the general public.

I generally oversee all this morning routine and keep volunteers organized. If we’re short on help I jump in to get shit done.

Tuesday morning I’m running an automatic floor cleaning machine. iPhone/iPod earphones in ears some Johhny Cash or Jennings or Haggard blasting along. I look up and what comes running down the hall towards me? This guy. 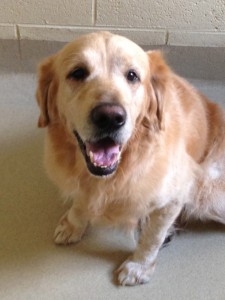 No care in the world. Smile on his face. Not scared or stressed. Not even phased that I have what amounts to a big assed vacuum cleaner and pressure washer running making noise. Comes up to me and sits. I bend down and reach out to pet him and he lifts his paw and shakes my hand. I swear on my eyes its the truth. I pet him, he lays down, rolls onto his back and I rub his belly and if you know anything at all about dogs, then you know his rear leg is kicking like Chinese chicken.

I have adopted a Cocker Spaniel from this shelter in the past which is at home with me and I have documented here on this very blog. I love Lucas he’s my buddy and a great dog. I am, as I have also eluded to, single and live alone. So in the dog category I am content. I am not actively looking for another dog. I have had two dogs in the past and its not unknown to me or impossible to manage. So with this knowledge, you the reader should have some insight to my mindset about more dogs.

Back to the story and I am rubbing this retrievers stomach.

I am not going to lie, I laid eyes on this dog and my mind said within seconds. “I am taking this dog”.  The other side of my good sense kicked in much like the conversations between heavenly angles and satanic devils one has in their heads when weighing out rather rash decisions. It went something like this:

So I momentarily get a grip and calm down with good sense. Whew crisis averted.

Dog was found wandering around a Walmart parking lot in the area. Some guy gets a leash on him, looks for owner. No one knows who dog belongs to and no one claims him. This fella brings him to us Tuesday morning and there I was scratching his belly and shaking his paw. Eyes as big as saucers, my heart telling my mind to “shut the fuck up” and well.

In the words of Paul Harvey, “and now for the rest of the story”.

I check the dog in and get some paperwork started on him. Scan him for any microchips (none) and get him a nice clean room in the bow wow hotel. No clue what his name is. Male, good teeth, good coat, no outward anomaly. He looks to be between 5-7 years old. Probably been wandering around a while since his weight is a little low. Some fleas, some hot spots where he’s scratched himself raw because of the fleas. Has a slight ear infection in both ears, probably from mites or whatever the great outdoors has gotten in there in the last however long he’s been on his own. No big deals otherwise.

We start him on some pills for the fleas, testing him for heart worm. Next week he’ll go to vet to get his ears fixed, a rabies shot, health check out, and leave his nuts behind in exchange.

The rest of the week since this past Tuesday, I have been checking on him, walking him, taking him into the fenced yard to run around and shit in peace.

I remained calm and carried on with emotions in check. I swear, honest.

Until this afternoons walk. 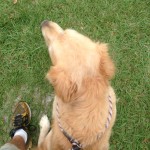 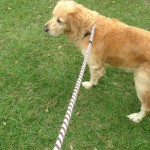 I walked him and I stop to really look at him. He nudges between my legs sits down and looks out at the pound we where near and where I was looking. Yea, that was all she fucking wrote. I took him back inside to his room, took a black magic marker to his cage card, and wrote “Adopted–Brock”.

I dont know where this dog has been and it angers me why someone would abandon this guy in such a manner. Unless by some slim chance his real owners show up to claim him, I know where he’s going to be as soon as we get him healthy and fixed up.