I need someone to show me the things in life that I can’t find
I can’t see the things that make true happiness, I must be blind
– Paranoid, Black Sabbath

Monday again. Another weekend blows by. Ever see a dead woman in a casket? Now you have. ———> We Sold Our Soul For Rock and Roll. Black Sabbath inside album cover, 1976-ish.

The last couple of years, Black Sabbath (with Ozzy, Butler, Iommi) have been rumored to be making new music and touring. When I hear these things I take it with a grain of salt. Ozzy and Sharron are pretty ruthless about contractual and legal issues in the past on any reunions, Iommi comes down with cancer, Ozzy falls off the wagon and starts popping pills and drinking, and well you get the idea.

Outside of all those things, Black Sabbath is probably the genesis and father of all things heavy metal. No one would know the name Ozzy Osbourne if there was no Black Sabbath.  Sabbath was around and making music in 1968-69.

Doing a little internet surfing this weekend I see the North American tour dates have been expanded and guess who is going to see Black Sabbath? I go into these types of concerts with an open mind and low expectations. As a music lover, I categorize these concerts in the same light as seeing The Who, Santana, Clapton/Cream, Rolling Stones, Plant/Page as last of the greatest who defined rock music with the long gone other greats. You just have to go to say you saw them. I have seen Ozzy before and even years ago they’ve had to wheel his old ass out on stage in a wheelbarrow, I think he has a f’ing cane now. None the less I’ll go and see what I can see and hear what I can hear. Paranoid, Sweet Leaf, War Pigs, Iron man, pretty much every go to guitar riff laden song a young kid learns right after Stairway to Heaven and Smoke on the Water.

One of my nieces turns two this month. My mother is trying to teach her to swim and I am teaching her to swear and spit. She is progressing along nicely. 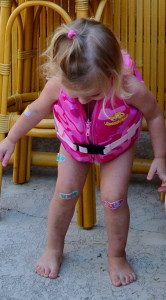