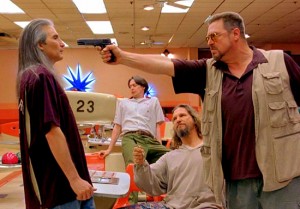 Its another TGIF around the Whats Up Brock empire and I for one am glad. I can’t quite put my finger on it but its been a long week.

Between the Honda Classic with Tiger Woods just down the road and a couple of cops getting shot yesterday morning the local news has been jam packed full of insanity. Insanity  that news folks and those that produce news television are complete morons. Sadly the crap they show us on the news is a direct reflection of society as a whole. They show us what we (collectively) want to see and hear about. This saddens me, because it becomes clearer to me each day that I am literally surround by idiots.

I live in a tropical hurricane zone. I know this. Its averaged 77 degrees this winter, I put up with the possibility of hurricanes. I don’t need 24X7 coverage every time a fart in a whirlwind spawns off the coast of ass-crack Africa. Let NOAA give me 48 hours notice before landfall and I am good.

A cop was shot and killed yesterday during a routine traffic stop. No rhyme, no reason, just a shitty thing. A shitty thing to die, but for Christ sake, it was a cop. Its part of his job. If you want to be a cop, and you follow around a known scumbag who has been in trouble, before, you ran his tags and know its him, then you wait for him to coast through a stop sign and pull him over, then guess what? Be ready for the unknown. In this case getting your ass shot the hell up by a lowlife piece of shit. Its part of the job and you accept that and if you don’t then find a new line of work. I feel bad for the cops family honest, but I dont need 48 hours of local news idiots pre-empting my Ellen Show to sit and pontificate why a drug dealing scumbag shot and killed a sheriff deputy for pulling him over. Its life, it sucks sometimes, move along nothing to see here.

I am all for local events and sporting activity. Anything that helps the local economy is ok and good in my book. The last fifteen or so years PGA national has been putting on the Honda Classic golf tournament. Last year El Tigre’ or Tiger “the meatshank” Woods has been playing in the tournament. Yes I understand he’s awesome and the crowds he draws I think are great. However for the last thirteen years the news could hardly give two shits about the Honda Classic and it was barely a thirty second blurb on the 11:00pm newscast. Now with Tiger playing, all the local news is camped out at the tournament. Tiger this, Tiger that, I wonder if Tiger will get caught banging Lindsey Vonn behind the Titleist bus in a full leg cast? The news doesn’t give half a shit about Tiger. The news are a bunch of vultures waiting to catch the guy bust a nut in some other whore, then judge the guy for falling from grace as the golf hero everyone loves and looks up to. The news and media made the guy the hero, but the reality is he’s just a damn great golfer who likes to get laid and hit some strange. Really who’s dreams are crushed here? It certainly isn’t Tigers. He’s living true to himself. Its the media who put the guy up on a pedestal and made him holier then thou and when they find out he isn’t the almighty world saving golf hero they wanted him to be, they chase and camp out faking interest in his golf waiting for him to be  a normal  asshole again.

As much as I rail against the news idiots for showing this shit and behaving the way they do, I have to sit and remind myself, they are only giving us shit because we demand to see the shit. Its ratings and they know we watch the cockamamie garbage they put out. They give us exactly what we want to see. I dont want to see it per-se but it saddens me that enough of my idiot neighbors and countrymen want to see it because it proves we’re doomed.

The only thing, and I mean only thing the news stations do right is the weather. No they have no more weather expertise then looking at doppler radar, seeing no rain, and then broadcasting “slim chance of rain today”. Any one of us could do the exact same thing. Where the news station does this right in my book, is very simple. They get a mid to late twenty something blond hottie with great tits and legs to tell me what I already know. I haven’t yet watched a news weather broadcast from my local NBC station where I have actually listened to the young lady (Kait Parker, Kait Parker I love you Kait Parker) and heard a damn thing she was saying about the weather. No sir. I look at the lovely Ms. Parker and dream about what her cute skirt would do in a hurricane, a light mist on her long bare legs, the tank top under her casual Friday business coat that not buttoned getting wet, the ever just barely pronounced nipple staining against the taut fabric….and my mind thinking, such a beautiful woman, shame she is brainwashed into thinking what she is doing right this second a semi-trianed chimp couldn’t also do.

So yeah, its a TGIF today for sure. I predict its going to be sunny with a chance of showers with a cool front then it will get warm again. And rain again, and …..