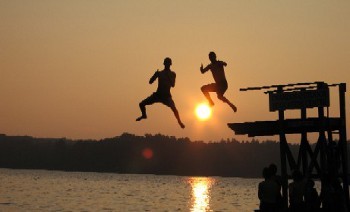 I never went to band camp. I did however in my youth go to a camp / ranch type thing for a week and its where I first learned to ride a horse. I don’t remember the name of the camp but its about 50-75 miles from here in another county. It was a Christian type youth thing with an emphasis on hunting, fishing, ranching, etc.

If I had to guess, I was probably 12-13 years old at the most. The place was run by this paraplegic old man in a motorized wheel chair. The lake had what amounted to a broken down helicopter on a small barge. There were ski ropes tied to the ends of the helicopter blade turned steel pole boom. The crippled old man would wheel his chair down to the edge of the lake, flop out of his wheel chair and then swim to the barge, crawl up, scoot to a chair on the side of the contraption, fire up the motor and work the spinning boom and ski ropes for us kids. We’d swim out one or two at a time, grab the ski rope handle and the old man would spin us around in the lake flinging flailing kids in all directions. It was a good time, and it was the first time I got to see some real pubescent vagina and think to myself, “hey that looks good, I want to get all up in that”.

Of course prior to that time, I had as a young man seen real life vagina before. The first time was Penny in kindergarten class flashing all the kids her junk during nap time. It was ok but at that time in my life I was more interested in talking about that weeks episode of Six Million Dollar Man or Baa Baa Black Sheep and drawing fighter jets, then some 5-6 year olds gash. Girls were still weird that smelled like strawberries and pee.

No, it wasn’t until I was away at camp and some old crippled man flung a cute blond 15 year old girl in a bikini with his chevy v-8 engine, helicopter blade, ski rope, child flinging lake blender who subsequently lost her bikini bottom that I knew I was going to like girls a hell of a lot. It also turns out I probably went to a camp as a kid that was run by a bible thumping crippled pedophile dirty old man, but thats a story I rather not think about.

You would think I would remember the girls name who had the magical vagina I spied that day at camp, but I can not. I can tell you what my horses name was that I rode and took care of all week. Chiquita! Chiquita was about 125 years old and had three hooves into the  Elmers glue factory and Old Roy dog food plant. How that horse remained alive so long I’ll never know. The blond magical vagina girl however rode a black stallion pony that could run like lightning. Man when she wasnt losing her bikini bottoms in the lake at the hands of the old pervert ski rope cripple man and wowing me with her awesome va-jay-jay she could ride the hell out of a horse. Had I been a little more older and wiser I would have put all this together faster and chased that young lady down more then I did that year at camp, but alas I am my fathers son and never been good at taking hints or putting the obvious together when it comes to women.

You’re probably wondering whats the point to all this and wheres the story going. I honestly don’t know that there is a point or why I am relating this story in as much as its simply a coming of age tale that has ultimately shaped my attraction in an ironic and slightly deviant way to the opposite sex. I really never found myself in later years getting involved with equestrian type bikini women with rather easy morals and the propensity for public display of ones sexual parts. No sir, I had to complicate things and look for rather conservative refined women with that ever elusive glint in the eyes that said, “after this rather boring intellectual movie we’re going home and I am going to redecorate the inside of your head with the level of slut I am going to bring to you tonight”.

I have gotten close to finding that girl a couple times in life. Its always the same thing, one or the other never everything in equal parts. All intellectual no slut. All slut, no intellectual. Conservative and equal parts slut, with a horrible side of pathological liar. A tall order in woman, yes but I know what I like and gravitate to. Why fool myself or someone else? I will admit thought in these days of my advanced age and the winding down of my biological clock, I have retooled and slightly modified my list of desirable traits in an ultimate woman. I wanted conservative, great sense of humor, loyal, honest, slutty (with me) type woman, now I have made compromises and realize no one is perfect. Now, I’ll settle for a sexy horse riding chick with a great vagina who will lie to me that I am the best and can tell an great fart joke. Back to basics and simple is as simple does I say!