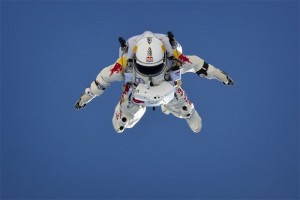 I was introduced and we both started groovin’
I said, “I dig you baby, but I got to keep movin’ on”

Another great weekend has come to pass. Naturally it went way too fast as they always do. I can’t bitch though, Felix Baumgartner’s weekend went way faster then mine. About 800+ MPH to be exact.

I have to give the guy credit and respect. Not for actually doing the stunt. Its been done before. Not quite as high, but there is a lot to be said when you are the first to do something like this with 1960’s technology.

What I do have respect for in Baumgartner is that he stuck to his dream of doing this and through all the set backs with law suits and money backer problems he followed through.

You and I can learn to skydive easy enough. Hell the army teaches retards how to do it at Ft Benning every year. (trust me I have met lots of them they are in fact retards. Marines! First to fight! Semper Fi!) Jumping out of planes and skydiving is not overly complicated. Doing it from the edge of space however and you’re more relying on your technical equipment to keep you alive. I am glad Felix got someone better then Walmart or Old Navy to build his suit and balloon.

In the end I think the biggest hurdle is conquering your own fears. In that regard Felix is an damn good example of what we can do and overcome.

The Jets move one into the “W” column this weekend as did Miami. Not bad, however it was a pleasure to watch Seattle break one off in New England’s ass. I love the Jets and always have, even in the lost years, but this abortion with Sanchez and Tebow is just not sitting right with me. Some kind of parity needs to be reached here and I have a suspicion that Sanchez isn’t long for the ride.

Walking Dead season three started last night. I know I am not the only one excited and or watching this series. What did you guys think? I thought the season was a little slow last year, but this year the new season started off great. Lots of zombie killing and the best part was hacking off Hershel’s leg with the axe. Thats primo TV if you ask me.

Comic Book Men also started its new season last night. If you’re not familiar with Comic Book Men its also on AMC. It revolves around Kevin Smith’s comic book store in Red Bank NJ, that some close friends of his run and manage. Its almost like Pawn Stars but with comic books and related nerd type toys. Its an excellent show and if you’ve ever listened to any of Kevin Smiths podcasts from his SMODCAST network then you will immediately recognize a lot of the characters on this show.

I know the question that is burning in everyones head. Did this jackass pressure clean the driveway? No. I was much too nice out. Theres always today though. Right after I mow the grass and start some laundry, because I didn’t do any of that crap either. Yes folks I pretty much took a knee this weekend. After work today, Monday has a beating waiting for me thats is for certain. No problem I can do it. Hey some douche just skydived from space in a  set of under-roos and a Star Trek walkie talkie. I can do anything damn it!!

Something just occurred to me.

We just put a man, and his equipment into the stratosphere (22+miles) with nothing but a helium balloon. Why the hell did NASA go broke building and maintaining those junk shuttles for 30+ years?

Build a couple of shuttles. Conventionally put them in low earth orbit which is accepted to be about 99 miles in altitude, then leave them there on auto-pilot. Put a few gas tanks in orbit too. Why send astronauts in and out of space with a rocket from the ground each time? Just send the astronauts up in lawn chairs and helium balloons  3/4 of the way and the rest of the way with a small jet pack to the shuttle waiting for them.

When the mission is over, they park the shuttle in its maintenance orbit, clean the toilets, pump out the shitter tanks, put a new crown air freshener on the dashboard and parachute back to earth.

The only thing limiting the lifting altitude of a helium ballon is the ability of the balloon material to expand without popping. NASA made velcro, can they not create material for a super balloon?

Our atmosphere is made up mostly of nitrogen and oxygen. Scientists already know Helium in its natural state occupies the top level of the atmosphere. All we would need to solve is the problem of material expansion of the balloon as it gets higher and higher. Even if the balloon only took the astronaut 2/3 or 3/4 of the way to the waiting shuttle or space capsule its got to be cheaper and easier to send just the people in and out of space rather then all the equipment every single time.

Look at this! Some Youtube, a pen, some napkins and a few beers and I just solved all of NASA’s space exploration issues in one weekend while scratching my ass and BBQ’s some hamburgers on my Big Green Egg. What the hell are we paying all those people with great big brains to do?

Enjoy your Monday as best you can. I have got to catch up on what I pissed off on this weekend. 😉