..pure Alabama Blacksnake? Ah…No, but what I do have isn’t too goddamned beaucoup either. What I have here is some mondo, bad assed, kiss your mother with that mouth, sit down, slam the table, I shit you not, homemade pork fried rice. 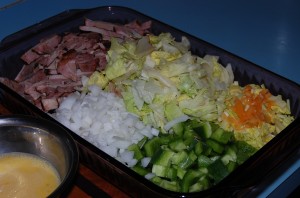 You may recall that this past weekend for dinner club meet up numero deuce, I made a BBQ pork roast for my guests. Well after eating pork left overs the rest of the week it was time for a reboot. I chopped up the remaining pork, and then diced up some onion, bell pepper, lettuce, celery, a habanero, a couple beaten eggs and broke out the wok. Some soy sauce, a load or two of Sriracha chili sauce, garlic power, salt, pepper and you pretty much have the ingredients for greatness.

Add in your seasoning, chili sauce, soy sauce, and continue to cook and let liquid evaporate off. 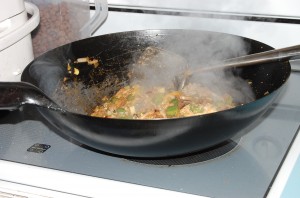 Spoon/shovel all the vegetables and meat up the sides of the wok leaving the hot center bare. Should have enough oil here if not hit it with a teaspoon or two more. Pour in beaten eggs and scramble eggs in center of wok.

Dump in lettuce. Stir, shake, stir, shake, repeat until lettuce just begins to wilt. Remove wok from heat, bowl up some of that greatness and enjoy. Pork fried rice, kicked up a notch with the chili sauce and you didn’t have to hit the greasy chinese motor kitchen behind the McDonalds in the strip mall. Yes President Obama I MADE THIS!

Brock you are truly a renaissance man. Your greatness knows no bounds. You are the Pater Familia of awesome, but what in the hell does your blog title have to do with pork fried rice? Well you see pork fried rice is a common food in more then one far east culture and when I think of far east culture the first thing that popped into my mind was the scene in Full Metal Jacket where Private Eightball was negotiating with the Vietnamese hooker for some boom boom in the middle of the battle of Hue City.

Rated G version of recipe can be found over in the recipe section of the blog for you rather weak of heart and mind.

For the rest of you…

…..son, all I’ve ever asked of my Marines is that they obey my orders as they would the word of God. We are here to help the Vietnamese, because inside every gook there is an American trying to get out. It’s a hardball world, son. We’ve gotta keep our heads until this peace craze blows over.