When he heard his first Beatles song.
Love Me Do, I think it was and from there it didn’t take him long.

Happy Monday gang. Yes I know Mondays are the worst. Watching the weekends go by, I am surprised they go so fast, looking around me, well I made the big time at last. Opps. Still channeling Paul Rogers and Bad Company. Did you know Elton John actually wrote Shooting Star? Bet you didn’t, but you do now.

Did you know Pete Townshend is credited with creating the Marshall Stack? Don’t know what a Marshall Stack is exactly? Been to a real rock and roll concert in your life? See the Marshall amps from floor to ceiling? Yea those. Pete Townshend of The Who requested more amplification from Marshall, who designed special 8X12″ cabinets with 100 watt tube amps. 1959 Marshall Super Lead was born. Townshend used 4 of these setups on stage. Love and loud music can cure your problems, you’re so lucking I am around.

Well, I guess I have get this next part over with sooner or later. I have tried to stall by dazzling you with catchy lyrics and rock and roll trivia long enough.

My New York football Jets took a good old fashioned ass whooping from the Miami Dolphins. They deserved every single bit of it too. No wonder Eva Longoria dumped Mark Sanchez. Sanchez is a retard (yes I said the word “retard” don’t shoot me pro-retard people) and as someone who didn’t and still doesn’t buy into the Tim Tebow hype machine, I am beginning to wish Ryan would start playing him and develop his arm. It would be nice to salvage next season with a capable quarter back and leader on the team, as it is now I think were circling the drain on this season. Division playoffs this year is a stretch. 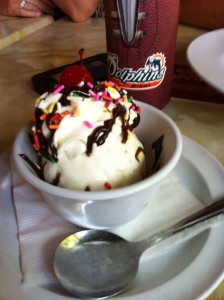 I will say however the nicest part about watching my Jets lose these last two weeks has been the ass of my waitress at the local joint where my friends and I have been taking in the game. Its your typical NFL Sunday 5000 flat screen every game on tv kind of place. The waitstaff are all beautiful girls with football jerseys and very small short shorts. Our waitress these last two weeks has been the same girl. She has an incredible ass. As I sit here and reflect on its beauty and those awesome short shorts I have realized I may be growing up. Why? Because I just now realized for the last two Sundays in a row, I have taken pictures of the great wings this place makes but not one single “creep shot” of this girls great ass. The honeymoon on my lecherous life is over. I guess I am a big boy now. Alright I admit, she has a nice ass, but the rest of her is great too. She even brought me some birthday ice cream, thank you great ass waitress girl! I imagined eating it off her butt. Guess Im still a pig. Thanks to a great group of friends that put up with my twisted humor and logic too, I am pretty blessed to have a great group of people in my life.

So hurricane Sandy is going to douche out the northeast. I have a few friends and family up that way. I hope they wont be affected to badly. The rest of you humps I sure hope you get power and transportation restored quickly. Just a little FYI from a Florida hurricane veteran. It can take upwards of a month to restore power when a good hurricane comes ashore. This affects everything from gasoline at pumps and food in stores, so be patient. Oh yea, and I hope you bastards got your Obama early vote in too, because I would just be heart broken if you couldn’t vote in the general election on November 6th from lack of power and transportation. See even God and Mother Nature know Obama sucks.

More tomorrow. Hang in folks and be safe if you live in the northeast.